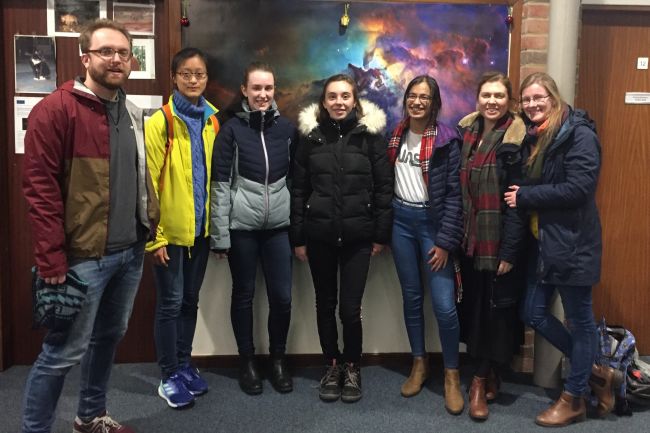 Last Wednesday, a group of Year 10s and Year 11s attended a Public Open Evening at the Institute of Astronomy, Cambridge.

We were invited to attend the evening after an Aspiration Friday talk last year on Astronomy from Matt Bothwell at the Institute.

Students heard a talk from Mallory Thorp on ‘Cosmic Collisions and the Fate of the Milky Way’.  We learnt that our galaxy is currently on a collision course with the galaxy of Andromeda – although we don’t need to panic, as this won’t happen for another 4.5 billion years!  Scientists have been researching what they think will happen when the galaxies collide by conducting theoretical experiments and then matching up these mathematical predictions with images of galaxies taken by telescopes.  It was fascinating to hear about what physicists such as Mallory predict will happen when the Milky Way collides with Andromeda and to learn that the galaxy will no longer look like a band across the night sky, but will take the shape of a curve before resembling a fiery ball.  It was particularly surreal to learn that scientists have already named our new galaxy after this collision takes place: Milkomeda!

We were then able to go stargazing using the Institute’s historic telescopes: a highlight was looking at the surface of the moon in such detail, noticing the peaks in the centre of craters formed by the ‘splash-backs’ of colliding asteroids.

It was a fascinating evening, and several of the students said that they would like to attend another evening themselves.  Public Open Evenings at the Institute of Astronomy run on Wednesdays throughout the winter period.  The timetable for this academic year can be found here: https://www.public.ast.cam.ac.uk/current-season